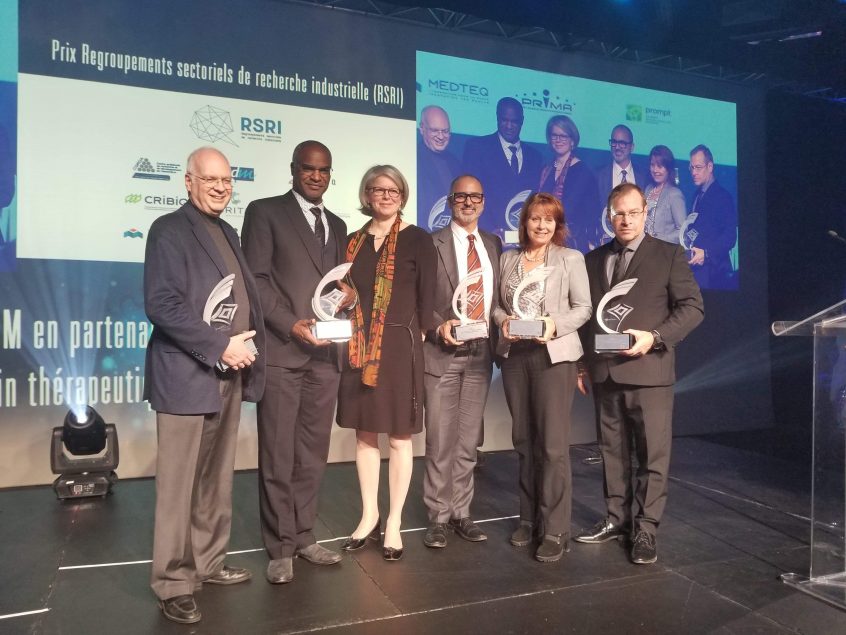 Montreal, November 22, 2019 – CQDM is proud to announce that the project led by Michel Bouvier from the Institute for Research in Immunology and Cancer (IRIC) of the Université de Montréal and the biotech Domain Therapeutics was awarded the RSRI Recognition Award during the ADRIQ Innovation Prize Gala held on November 21st.

This CQDM-funded project has received $1.8M over three years for the development of a GPCR‑Specific Biosensor Technology. GPCRs are membrane proteins that offer tremendous potential in pharmacological research to monitor the efficacy of drugs at the cellular level. Based on a public-private partnership, Michel Bouvier’s project exemplifies the collaborative approach promoted by CQDM.

In addition, Quebec has derived significant benefits from the project by attracting the French biotech company Domain Therapeutics, which established itself in Montreal as a result of the project, leading to the creation of about ten highly skilled jobs in the province. The BioSens-All™ has since reached worldwide commercialization, allowing pharmaceutical partners to identify the optimal efficacy and safety profile for lead compounds, thereby mitigating the risk failure. To date, BioSens-All™ made it possible to categorize more than 800 mutant GPCRs and conduct more than 140 specific research projects. The company’s expertise is now recognized by leading pharmaceutical companies worldwide.

Building on this success, the team members have undertaken new collaborative research projects with pharmaceutical companies ((Bristol Myers Squibb, Pfizer, Vertex, Novo-Nordisc), while another project with Boehringer Ingelheim has recently been launched.

“Without the support and confidence of CQDM, this project, which truly transformed the way to address GPCRs activity in both academic and industrial laboratories, would never have seen the light of day. The project was a real team effort. Under the coordination of Christian LeGouill from my lab, more than 10 people working in the labs of Profs. Laporte, Pineyro, Hebert and Leduc, along with mine, made this project a scientific and economic success.”

“We are delighted with the success of this project, which is a concrete example of the public-private partnership model that CQDM supports,” said Diane Gosselin, President and CEO of CQDM. “Through multi-institutional collaborations, biopharmaceutical innovations will be able to reach patients faster.”

“Merck congratulates Prof. Michel Bouvier and his team on this great achievement,” said Jennifer Chan, Vice President, Policy and External Affairs, Merck Canada. “We are proud to be part of this success, which reflects the importance of collaboration between the private and public sectors in support of life sciences innovation in Quebec and the development of innovative approaches for the benefit of patients.”

“At Pfizer, our purpose is bringing breakthroughs that change patients’ lives. We would like to congratulate Prof. Michel Bouvier and Domain Therapeutics on winning this prestigious ADRIQ award for their project which will help to increase success rates in the difficult, challenging process of developing medications”, said Dr. Vratislav Hadrava, Vice President, Medical Affairs, Pfizer Canada. “BioSens-All™ is a cutting-edge technological platform and Pfizer is very fortunate to have worked with Prof. Bouvier and his team in developing new molecules”.

“We are proud and honored to be involved at this award through our collaboration with the consortia of laboratories involved in research targeting G Protein-coupled Receptors (GPRCs) and led by Prof. Michel Bouvier”, indicated Pascal Neuville, Chief Executive Officer of Domain Therapeutics. “This unique private-public research collaboration has already been quite successful and will continue generate positive outcomes and bring to the forefront not only the quality of the academic research performed in Quebec but as well highlights the openness of the research centers to work with industry partners”.

About the RSRI Recognition Award

Created in 2019, the prize is awarded by nine (9) RSRI (CQDM, CQRDA, CRIAQ, CRIBIQ, CRITM, InovÉÉ, MEDTEQ, Prima and Prompt). It showcases the strength of networking initiatives between academia and the industry by recognizing the significant impact of a collaborative research project on the Quebec economy.

CQDM is a biopharma-based research consortium created in 2008 with the mission to fund the development of innovative technologies to accelerate drug discovery and development. Its business model is based on a collaborative approach bringing together world-leading pharmaceutical organizations, Canadian biotech companies as well as the Canadian and Quebec governments who share the costs of the research. CQDM uses this leverage to reduce the risks inherent to early-stage biopharmaceutical research. In doing so, CQDM bridges the funding gap needed to drive innovation across the academic and private sectors, especially where early-stage research is concerned. Over the last 10 years, CQDM has benefited from the contribution of 13 industrial members: that includes Merck, Pfizer, AstraZeneca as founding members as well as Boehringer Ingelheim, Eli Lilly Canada, GlaxoSmithKline, Janssen, Novartis Pharma Canada, Roche, Sanofi Canada, Servier, Takeda and now Amgen. CQDM also received contributions from Quebec’s Ministry of Economy and Innovation (MEI) and from the Government of Canada under the Business-Led Networks of Centres of Excellence Program (BL-NCE). Since 2008, CQDM has supported the development of 77 outstanding innovative technologies totaling $93M in funding. These R&D projects, carried out by more than 1,200 scientists from 83 different research institutions (40 public and 43 private) across Canada, have generated numerous economic benefits for all the stakeholders of the life science ecosystem. For more information: http://www.cqdm.org/en.