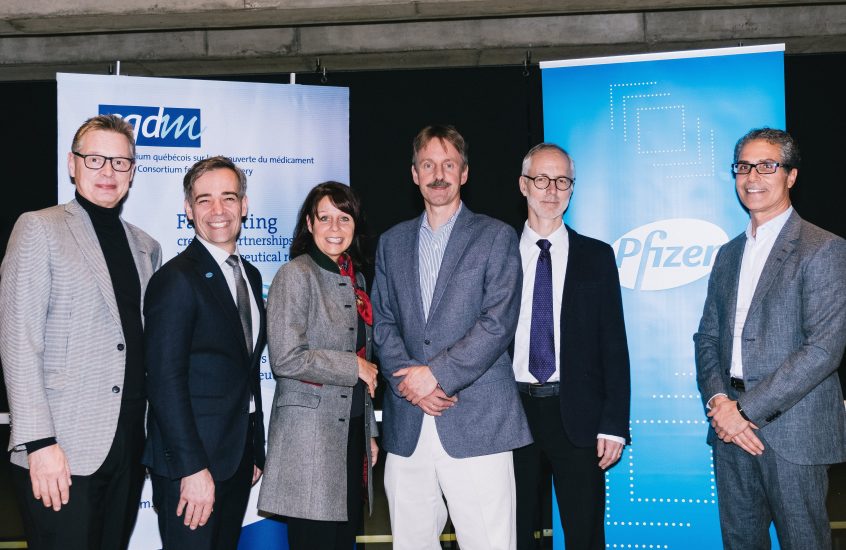 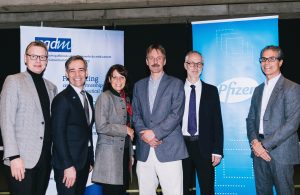 Montreal, November 19, 2018 – We are pleased to announce that Pfizer Canada, a founding member of CQDM, renews its confidence in CQDM with a contribution of $550,000. This significant engagement will help fund the development of several highly competitive and innovative technologies in biopharmaceutical research in Quebec with the ultimate goal of developing better and safer drugs. It will also provide a financial support for Quebec investigators to join Canadian and international networks and it will foster successful public-private partnerships.

The Pfizer contribution has already allowed CQDM to select and support the development of a drug-screening platform for protein expression levels led by Professor Brian Chen, a scientist from the Brain Repair and Integrative Neuroscience (BRaIN) Program at the Research Institute of the McGill University Health Centre (RI-MUHC) in Montreal. Professor Chen’s highly competitive technology will offer new avenues for the treatment of patients with diseases caused by low gene expression such as autism, depression and neurodegeneration. This support from Pfizer, together with contributions from the Ministry of Economy and Innovation of the Government of Quebec (MEI), the Brain Canada Foundation and the Healthy Brains for Healthy Lives initiative supported by Canada First Research Excellence Fund, will bring a total of $1.45M to develop this technology.

“As a founding member of CQDM, we are very pleased to celebrate their 10th anniversary and applaud their solid track record of $68 million invested in sixty-four R&D projects and direct economic benefits of $194 million’’ said John Helou, President, Pfizer Canada. ‘‘This is another example of pharmaceutical investment in Canada’s innovation ecosystem that the PMPRB does not capture in its annual tabulation of our industries footprint due to the out-dated eligibility criteria associated to the Scientific Research and Experimental Development (SR&ED) program. , However, we are pleased to continue our partnership with CQDM as it will help to ensure that the province of Quebec is well positioned to attract research investments.”

“The Québec government strongly encourages the development of new technology to strengthen the province’s biopharmaceutical innovation ecosystem and maintain Québec’s position as a world leader. Pfizer’s CQDM initiative, which helps foster the discovery of new treatment avenues, is a good example of a present-day partnership established to ensure prosperity tomorrow.” Pierre Fitzgibbon, Minister of Economy and Innovation and Minister Responsible for the Lanaudière Region.

“Thanks to Pfizer Canada’s continuous support over the last 10 years, CQDM has been able to fill an important gap in the innovation chain. This new contribution from Pfizer will allow CQDM to further support the growth of our ecosystem and sustain the Government of Quebec’s vision to develop a world-class hub in life sciences.” said Diane Gosselin, President and CEO of CQDM.

About Pfizer Canada
Pfizer Canada Inc. is the Canadian operation of Pfizer Inc., one of the world’s leading biopharmaceutical companies. Our diversified health care portfolio includes some of the world’s best known and most prescribed medicines, vaccines and consumer health products. Every day, Pfizer Canada employees work to bring therapies to patients that significantly improve patients’ lives. We apply science and our global resources to improve the health and well-being of Canadians at every stage of life. Our commitment is reflected in everything we do, from our disease awareness initiatives to our community partnerships. To learn more about Pfizer Canada, visit pfizer.ca or you can follow us on Twitter (twitter.com/PfizerCA) or Facebook (facebook.com/Pfizer.Canada). For more information: www.pfizer.ca

About CQDM
CQDM is a biopharma-based research consortium created in 2008 with the mission to fund the development of innovative technologies to accelerate the drug discovery and development. Its business model is based on a collaborative approach bringing together world-leading pharmaceutical organizations, Canadian biotech companies as well as the Canadian and Quebec governments who share the costs of the research. CQDM uses this leverage to reduce the risks inherent to early-stage biopharmaceutical research. In doing so, CQDM bridges the funding gap needed to drive innovation across the academic and private sectors, especially where early-stage research is concerned. Over the last 10 years, CQDM has benefited from the contribution of 13 industrial members: which includes Merck, Pfizer Canada, AstraZeneca as founding members as well as Boehringer Ingelheim, Eli Lilly Canada, GlaxoSmithKline, Janssen, Novartis Pharma Canada, Roche, Sanofi Canada, Servier, Takeda and Amgen. CQDM also received contributions from Quebec’s Ministry of Economy and Innovation (MEI) and from the Government of Canada under the Business-Led Networks of Centres of Excellence Program (BL-NCE). Since 2008, CQDM has supported the development of 64 outstanding innovative technologies totaling $68M in funding. These R&D projects carried out by 1200 scientists from 69 different research institutions (38 public and 31 private) across Canada, have generated numerous economic benefits for all the stakeholders of the life sciences ecosystem. For more information: https://www.cqdm.org/

About Brain Canada and the Canada Brain Research Fund
Brain Canada is a national registered charity headquartered in Montreal, that enables and supports excellent, innovative, paradigm-changing brain research in Canada. Founded in 1998, Brain Canada is celebrating its 20th anniversary this year. Since its inception, Brain Canada has made the case for the brain as a single, complex system with commonalities across the range of neurological disorders, mental illnesses and addictions, brain and spinal cord injuries. Looking at the brain as one system has underscored the need for increased collaboration across disciplines and institutions, and a smarter way to invest in brain research that is focused on outcomes that will benefit patients and families. Brain Canada’s vision is to understand the brain, in health and illness, to improve lives and achieve societal impact.

The Canada Brain Research Fund is a public-private partnership between the Government of Canada and Brain Canada, designed to encourage Canadians to increase their support of brain research, and maximize the impact and efficiency of those investments. Brain Canada has committed $115 million from private donors and non-federal partners—now numbering more than 100—which Health Canada has matched with $120 million. For more information, visit www.braincanada.ca.

About Healthy Brains for Healthy Lives
Healthy Brains for Healthy Lives (HBHL) is a high profile, high priority multidisciplinary and cross-sectoral initiative located at McGill University, made possible with support from the Canada First Research Excellence Fund (CFREF), Quebec’s  Ministry of Economy and Innovation (MEI), and the Fonds de recherche du Quebec (FRQ). HBHL builds on McGill’s scientific excellence and global leadership in areas of neuroscience that hold the greatest promise for delivering implementable, clinically effective outcomes in brain and mental health. It aims to transform many brain disorders from terminal or life-long afflictions to treatable, even curable, conditions. https://www.mcgill.ca/hbhl