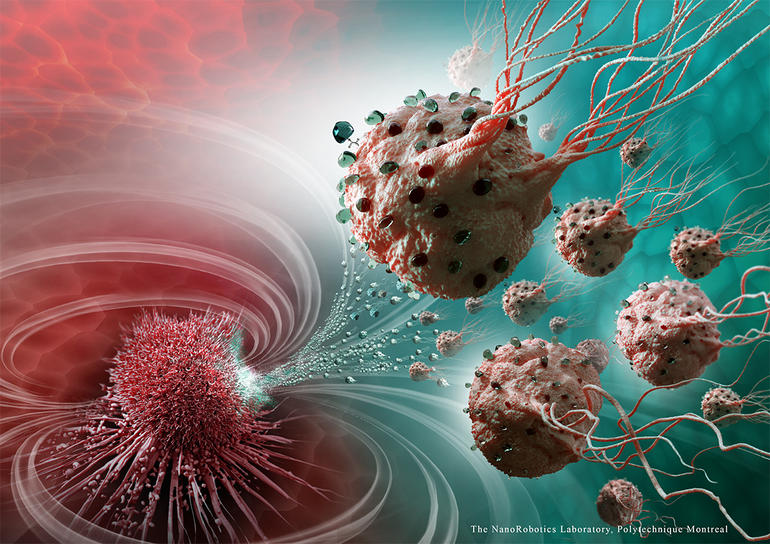 Montréal, August 25, 2016. – CQDM salutes the extraordinary breakthrough in the fight against cancer uncovered by Professor Sylvain Martel and his team at Polytechnique Montréal. The researchers developed a first-in-kind medical intervention platform that guides nanobots across the vasculature of a living organism to deliver therapeutics at the core of tumors.

CQDM granted $1.9 million in funding to Pr. Martel and his team in 2011. “The funds were injected at a pivotal early development stage of this technology that uses magnetically-guided nanotransporters to deliver drugs to the core of tumors,” said Pr. Martel. Recognizing the innovative nature of this project, CQDM saw the potential of this risky yet promising engineering technology in developing new drugs, specifically for the treatment of colorectal cancer.

A few years later, this project came to fruition when the team produced a solid proof-of-concept in a colorectal cancer animal model. A recent article published in the prestigious Nature Nanotechnology describes Pr. Martel’s exceptional scientific advances. It is now possible to precisely target cancer cells while preventing exposure of healthy cells to the toxic effects of drugs. In designing the nanotransporters, researchers used bacteria loaded with anti-cancer drugs because these small and manipulable bacteria (or nanobot agents) can easily navigate across small blood vessels to reach their target. Once inside a tumor, the nanobot agents can independently detect low-oxygen (or hypoxic) zones in the tumor and release the payload. These hypoxic zones are known to be resistant to most treatments, including radiotherapy.

To move around, the bacteria used by Pr. Martel’s team rely on a type of synthetic compass made up of a chain of magnetic nanoparticles that allows them to follow a computer-controlled magnetic field, as well as an oxygen concentration sensor to help them reach and remain in the active zones of a tumor. This innovative use of natural nanobots could potentially redefine how we treat cancers more effectively while eliminating the unpleasant side effects of current therapies.

“CQDM is extremely proud to have financially supported this project which allows Professor Martel to demonstrate that the use of nanorobots to seek and destroy tumors is not only feasible but also a great source of hope in the fight against cancer. Clearly, our funding has a tangible impact on biopharmaceutical research. We offer Pr. Martel and his team our best wishes for success moving forward,” added Marc Thibault, Program Director at CQDM. On August 24th, the Government of Quebec and the Canada Foundation for Innovation (CFI) announced an additional funding in order to transpose the procedure developed by Pr. Martel’s team into clinical applications.

About CQDM
CQDM is a consortium active in biopharmaceutical research whose mission is to fund the development of innovative tools and technologies to accelerate drug discovery. Unique in the world, CQDM’s business model is based on a collaborative approach where all stakeholders share the costs of biopharmaceutical research and benefit from its results. CQDM also provides a common meeting ground where academia, governments, biotechs and the pharmaceutical industry converge to address numerous complex medical challenges. CQDM receives financial support from Merck, Pfizer Inc., AstraZeneca, Boehringer Ingelheim, GlaxoSmithKline, Eli Lilly Canada, Janssen, Novartis Pharma Canada, Sanofi Canada, as well as from Quebec’s Ministry of Economy, Science and Innovation (MESI) and from the Government of Canada under the Business-Led Networks of Centres of Excellence Program (BL-NCE). For more information: www.cqdm.org.