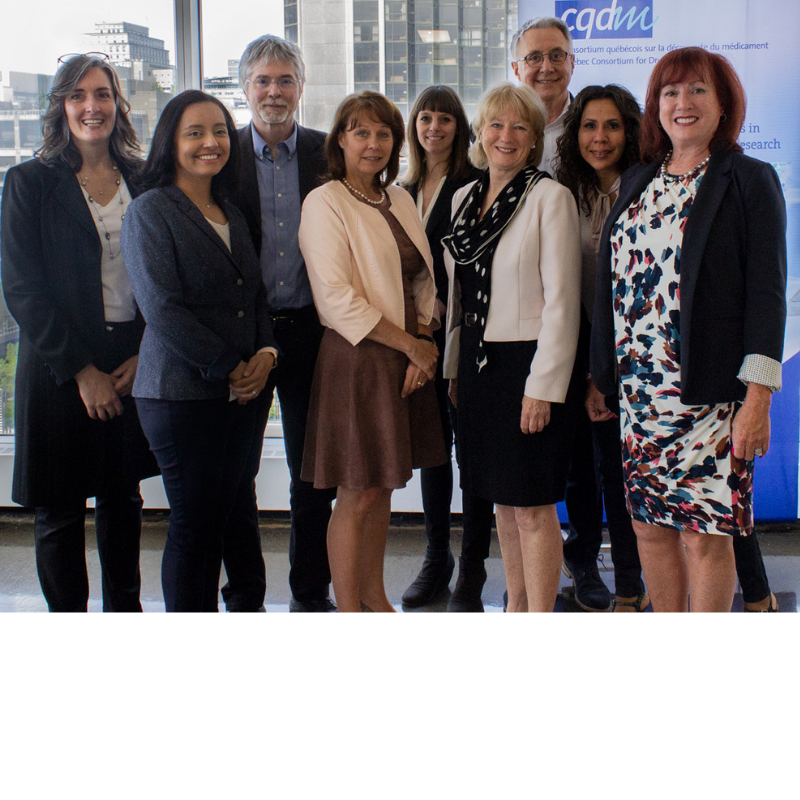 Montreal, June 1, 2019 – The Canadian Cancer Society (CCS), a leading breast cancer research funder, and CQDM, a Quebec research consortium whose mission is to fund the development of biopharmaceutical technologies and drugs, are proud to announce that nearly $10 million will be invested to fund three breast cancer research projects over the next three years.

“The research partnership between the Canadian Cancer Society and the CQDM brings together key players in the area of breast cancer research in Quebec and has the support of several Canadian biotech firms,” explained Denis Lalonde, Executive Director of the CCS – Quebec. The CCS will invest $1.5 million from the proceeds of its CIBC Run for the Cure and the CQDM will match this amount. Other partners will contribute around $7 million.

“Montreal is known for having many accomplished breast cancer researchers and since the CCS aims to fund the most cutting edge and innovative research in the country, we’re pleased to support two researchers from McGill University, Morag Park and Alain Nepveu, and a researcher from the Jewish General Hospital, Mark Basik, who will use next-gen technologies to pave the way for new breast cancer treatments with the potential to save a great many lives,” said Mr Lalonde.

Conducted in collaboration with Aspect Biosystems, this innovative project aims to isolate the three components of a tumour, and using a 3D printer, reconstruct the tumour in vitro and test different drugs to determine which would be the most effective. This technology could eventually lead to the discovery of new targeted therapies capable of eradicating these highly aggressive cancers.

In collaboration with the NEOMED Institute, promising compounds will be validated and subjected to several rounds of changes in order to improve them. The best compounds will be tested and biomarkers will be developed to test their effectiveness. These markers could also be used to select patients eligible for clinical trials of these novel compounds so that they might benefit from these new targeted therapies, with the ultimate goal being of better chances of remission.

Dr. Basik and his team, in collaboration with My Intelligent Machines (MIM) and Exactis Innovation, propose to use the power of artificial intelligence to determine with great precision, from blood and tumour samples, whether or not additional chemotherapy is necessary for patients with triple negative breast cancer patients, thereby sparing those who do not need it from its toxic side effects.

“The partnership between the CCS and the CQDM will advance cutting-edge breast cancer research in Quebec,” said CQDM President and CEO, Diane Gosselin. “The funds granted by the CQDM will come from SynergiQc, a program that develops biopharmaceutical products and tools such as new drugs and next-gen technologies that can pave the way for new breast cancer treatments.”

About the Canadian Cancer Society

The Canadian Cancer Society is a national community-based organization whose mission is to eradicate cancer and improve the quality of life of people living with cancer. To learn more about cancer, visit cancer.ca or call our free, bilingual Cancer Information Service at 1 888 939-3333.

CQDM is a biopharmaceutical research consortium whose mission is to fund the development of innovative tools and technologies to accelerate the discovery and development of safer and more effective drugs. Our business model favours a collaborative approach where the world’s leading pharmaceutical companies, Canadian biotechnology companies, as well as the governments of Quebec and Canada share the costs of research. Since 2008, CQDM has granted $68 million in funding to support the development of 64 cutting-edge technologies. For more information, visit www.cqdm.org.