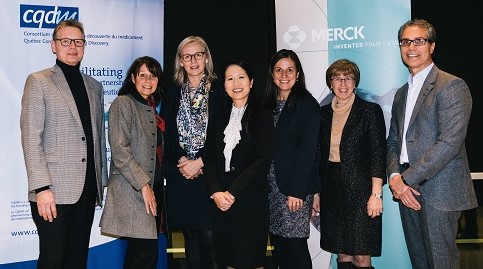 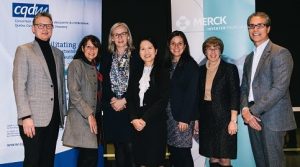 Montreal, Quebec – November 19, 2018 – CQDM is delighted to announce that Merck Canada, a founding member of the consortium, is renewing its commitment with a $3.5M contribution to support the development of disruptive technologies in biopharmaceutical research in Quebec and Canada. The research and development projects funded as part of this initiative will be selected through the CQDM Quantum Leap and SynergiQc biopharmaceutical funding programs.

Aligned with the province’s Life Sciences Strategy unveiled in May 2017, the two organizations are strengthening their ongoing commitment to health care innovation and research in Quebec through this partnership. With this renewed investment, Merck Canada’s overall contribution to CQDM will now total $9.5M.

“As a founding member of the CQDM, Merck Canada is proud to have contributed to Quebec’s dynamic life sciences ecosystem by partnering with CQDM throughout the last 10 years,” said Anna Van Acker, President and Managing Director of Merck Canada Inc. “We believe that a vibrant economy starts with innovation, and today’s investment is yet another example of the modern R&D model we are pursuing in Canada.”

“Stepping up investment in innovative technology is a top priority for the government. Merck’s contribution to biopharmaceutical research in Québec and its strong commitment to CQDM attests to the vitality of this industry, which generates a wealth of economic benefits. We firmly intend to continue supporting growth in this sector in order to promote the development of better treatments and ensure Québec remains a world leader.” Pierre Fitzgibbon, Minister of Economy and Innovation and Minister Responsible for the Lanaudière Region.

“What a nice way to celebrate our 10th anniversary,” said Diane Gosselin, President and CEO of CQDM. “Merck Canada’s engagement into CQDM has been key to our success. In addition to its very significant financial contribution over the last 10 years, Merck has provided extremely valuable expertise through the contribution of 32 mentors who have worked closely with the CQDM funded investigators. We are looking forward to pursue our long-lasting collaboration with Merck Canada for the benefit of all industry stakeholders.”

Since 2008, CQDM and its partners have supported the development of 64 outstanding innovative technologies through investments totaling $68M. These R&D projects, carried out by 1,200 scientists from 69 different research institutions (38 public and 31 private) across Canada, have generated numerous economic benefits for all stakeholders in the life science ecosystem. Projects have resulted in the development of 500 new products, services and research tools, including 130 therapeutic products or drugs currently under development. Technologies derived from CQDM-supported projects have contributed to the launch of six start-up companies, the expansion of more than 40 SMEs and the establishment of a foreign company in Quebec. In addition, the ripple effect of CQDM funding has led to R&D investments from other sources in the order of $194M.

About Merck in Canada
For over a century, Merck has been inventing for life, bringing forward medicines and vaccines for many of the world’s most challenging diseases. Merck is a leading global biopharmaceutical company with a diversified portfolio of prescription medicines, vaccines, biologic therapies, including biosimilars, and animal health products. In Canada, Merck is a leader in a broad range of areas such as oncology, infectious diseases, diabetes, and vaccines, and markets more than 250 pharmaceutical and animal health products.  Based in Montréal, Québec, Merck employs approximately 783 people across Canada. Merck is one of the top R&D investors in Canada, with investments totaling $35.2 million in 2016 and more than $1 billion since 2000. For more information about our operations in Canada, visit http://www.merck.ca/en and connect with us on YouTube and Twitter @MerckCanada.

About CQDM
CQDM is a biopharma-based research consortium created in 2008 with the mission to fund the development of innovative technologies to accelerate the drug discovery and development. Its business model is based on a collaborative approach bringing together world-leading pharmaceutical organizations, Canadian biotech companies as well as the Canadian and Quebec governments who share the costs of the research. CQDM uses this leverage to reduce the risks inherent to early-stage biopharmaceutical research. In doing so, CQDM bridges the funding gap needed to drive innovation across the academic and private sectors, especially where early-stage research is concerned. Over the last 10 years, CQDM has benefited from the contribution of 13 industrial members: that includes Merck, Pfizer, AstraZeneca as founding members as well as Boehringer Ingelheim, Eli Lilly Canada, GlaxoSmithKline, Janssen, Novartis Pharma Canada, Roche, Sanofi Canada, Servier, Takeda and now Amgen. CQDM also received contributions from Quebec’s Ministry of Economy and Innovation (MEI) and from the Government of Canada under the Business-Led Networks of Centres of Excellence Program (BL-NCE). Since 2008, CQDM has supported the development of 64 outstanding innovative technologies totaling $68 M in funding. These R&D projects carried out by 1,200 scientists from 69 different research institutions (38 public and 31 private) across Canada, have generated numerous economic benefits for all the stakeholders of the life science ecosystem.  For more information: http://www.cqdm.org/en