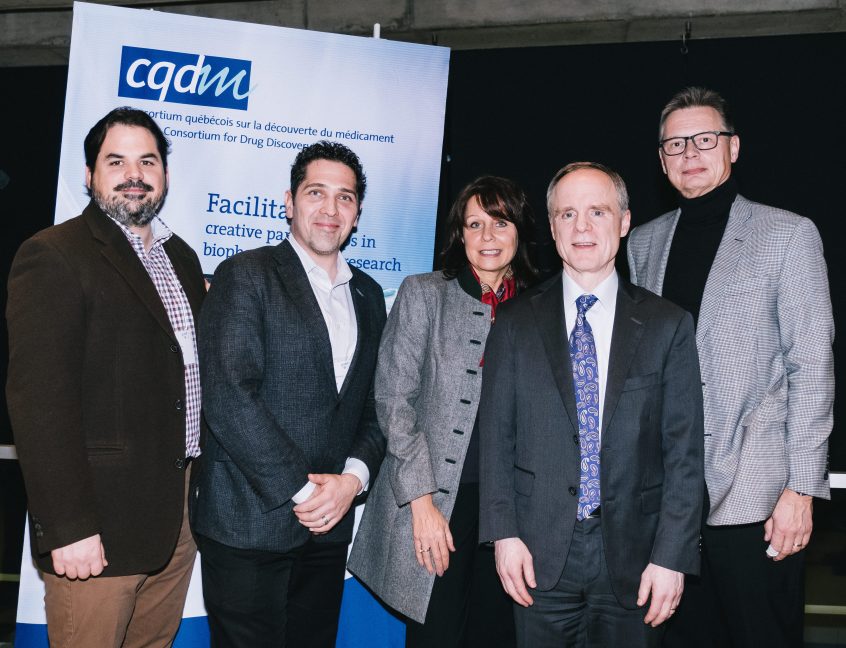 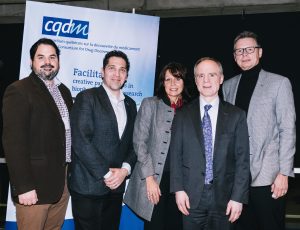 Montreal, November 19, 2018 – CQDM, Diazon and the Oncopole, in collaboration with Mitacs, are pleased to announce the creation of the Gordon Shore Prize to pay tribute to the remarkable accomplishments of Professor Shore in the field of cancer research. CQDM, Diazon, the Oncopole, in collaboration with Mitacs, will endow the newly founded Gordon Shore Prize with an initial contribution of $24,000 to support the first industrial research experience of an outstanding graduate student. Additional partners will be invited to join CQDM, Diazon and the Oncopole to increase the number of training opportunities supported by this prize.

Gordon Shore was an exceptional scientist who dedicated his career to cancer research. Internationally known for his research on cell survival and death mechanisms, he was Professor Emeritus in the Department of Biochemistry at McGill University and member of the Rosalind & Morris Goodman Cancer Research Centre. Professor Shore was not only an outstanding scientist but also an accomplished entrepreneur. In 1998, he leveraged his research knowledge and co-founded Gemin X Pharmaceuticals to advance his first novel drug candidate to a successful clinical proof-of-concept for the treatment of small cell lung cancer. In parallel, a second novel compound was identified and in-licensed, advancing from preclinical to clinical stage before the sale of the company in 2011. Combining his research and commercial development experience, in 2010 Professor Shore, together with his colleagues Anne Roulston, Jerry Pelletier, William Muller, Nahum Sonenberg and Michel Tremblay raised funds from CQDM and Genome Quebec to build an integrated functional genomic platform. This technology exploits genome-wide approaches focused on synthetic lethality and personalized medicine, resulting in the Laboratory for Therapeutic Development. This platform has generated the knowledge and tools that helped Professor Shore to elucidate the clinical path forward for drug candidates. In 2013, Professor Shore co-founded and became the Chief Scientific Officer of Diazon Pharmaceuticals Inc. where, together with his team at the Laboratory for Therapeutic Development, they discovered the mechanism of action of a potent anti-tumor molecule, DZ-2384. This compound is being investigated for the treatment of multiple different cancers and exhibits strong activity across multiple preclinical models through a unique mechanism of action that translates into a superior safety profile. This discovery, published in Science Translational Medicine, was critical to the development of the compound’s clinical strategy.

Gordon Shore was not only an exceptional scientist and a successful entrepreneur, but also a man of honour and passion that was admired by his students and colleagues alike. Sadly, Gordon passed away on September 7, 2018 after a long struggle with pancreatic cancer.

In memory of this outstanding individual, the Gordon Shore Prize will be awarded to graduate students demonstrating excellence in their Master’s or Ph.D. thesis in cancer research. The funds will support a training opportunity in industrial research that will facilitate their transition from university to industry. Awardees will be selected through a call for proposals that will be launched in the beginning of 2019 across the province of Québec. The selection criteria and the training opportunity will be detailed in the call for proposals. The awarded recipients will be announced in Spring 2019. To receive the call for applications, contact Naëla Janmamode (njanmamode@cqdm.org).

“CQDM is proud to have contributed to the funding of Professor Gordon Shore’s integrated functional genomics platform, which has had a major impact on the discovery of two new anti-tumor molecules in clinical development. Through this award, we wish to pay tribute to this eminent researcher who was a source of inspiration in his field,” said Diane Gosselin, President and CEO, CQDM.

“Gordon was instrumental in the founding of Diazon and the advancement of its lead program DZ-2384 to clinical development. Gordon’s passion, in addition to advancing cancer research, was the development of a team of people from both academia and business to achieve a common goal – that of bringing great science from the bench to patients. We are proud to be associated with this prize, that will provide opportunities for outstanding graduate students to experience, in industry, the next steps in the development of important new discoveries,” said Michael Dixon, President of Diazon Pharmaceuticals

“Professor Shore was able to successfully bridge the academic sector and the industry. With this prize, the Oncopole hopes to inspire tomorrow’s researchers to take over and contribute to create a dynamic cancer research environment in Québec,” said Maxime Dumais, acting Director at the Oncopole.

“Mitacs is honoured to collaborate with CQDM, Diazon Pharmaceuticals, and The Oncopole in support of the Gordon Shore Prize,” said Jesse Vincent-Herscovici, Vice President of Business Development at Mitacs. “This award will support a graduate student like Professor Shore — an exceptional scientist with honour and passion — to provide them with the opportunity to hone job-ready skills and facilitate their transition to industry.”

About CQDM
CQDM is a biopharma-based research consortium created in 2008 with the mission to fund the development of innovative technologies to accelerate the drug discovery and development. Its business model is based on a collaborative approach bringing together world-leading pharmaceutical organizations, Canadian biotech companies as well as the Canadian and Quebec governments who share the costs of the research. CQDM uses this leverage to reduce the risks inherent to early-stage biopharmaceutical research. In doing so, CQDM bridges the funding gap needed to drive innovation across the academic and private sectors, especially where early-stage research is concerned. Over the last 10 years, CQDM has benefited from the contribution of 13 industrial members: that includes Merck, Pfizer, AstraZeneca as founding members as well as Boehringer Ingelheim, Eli Lilly Canada, GlaxoSmithKline, Janssen, Novartis Pharma Canada, Roche, Sanofi Canada, Servier, Takeda and now Amgen. CQDM also received contributions from Quebec’s Ministry of Economy and Innovation (MEI) and from the Government of Canada under the Business-Led Networks of Centres of Excellence Program (BL-NCE). Since 2008, CQDM has supported the development of 64 outstanding innovative technologies totaling $68 M in funding. These R&D projects, carried out by 1,200 scientists from 69 different research institutions (38 public and 31 private) across Canada, have generated numerous economic benefits for all the stakeholders of the life science ecosystem. For more information: http://www.cqdm.org/en.

About Diazon Pharmaceuticals Inc.
Diazon Pharmaceuticals, a Montreal-based company, is developing the onco-therapeutic DZ-2384 that targets a proven therapeutic pathway in oncology, but one whose potential in modern cancer therapy has been severely restricted due to unacceptable toxicities. DZ-2384 overcomes this restriction by modulating microtubule structure and dynamics in a distinct way, delivering potent anti-tumor efficacy with a superior safety profile. The company was founded in 2013 by researchers at UCLA and McGill University. For more information: http://www.diazonpharmaceuticals.com.

About the Oncopole
The Oncopole is a Quebec hub for research, development and investment to accelerate the fight against cancer. Created in February of 2017, it is the product of a unique co-creation process led by the Fonds de recherche du Québec – Santé (FRQS) and made possible by an initial $15M investment from Merck Canada. The Oncopole’s mission is to act as a catalyst leveraging actions made by the key players in Quebec’s oncology and innovation research ecosystem. As a result, it aims to position the province as a leader in the field. Its priorities of action, namely research, entrepreneurship, commercialization and integration of innovation, as well as clinical relevance, are orchestrated in order to foster the mobilization of stakeholders, the discovery of innovative approaches to fight cancer and, ultimately, a positive impact for the benefit of patients. For more information, go to: oncopole.ca

About Mitacs
Mitacs is a not-for-profit organization that has fostered growth and innovation in Canada for business and academia for 19 years. Working with more than 60 universities, 4,000 companies, and both federal and provincial governments, they build partnerships that support industrial and social innovation in Canada. Funded by the Government of Canada, the Government of Quebec along with all provinces, and with Canadian universities, Mitacs internships and fellowships connect companies and organizations with researchers to advance innovation and support growth. For more information, please see: https://www.mitacs.ca/en.