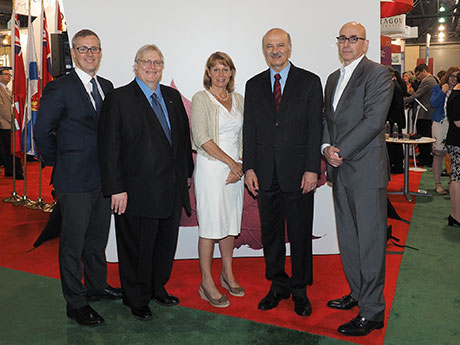 Encycle Therapeutics Inc., a biotechnology company founded by Dr. Andrei Yudin of the University of Toronto in partnership with MaRS Innovation, is a Canadian start-up emerging as a market leader in finding orally-bioavailable molecules. Today, the company announced $840,000 in funding from CQDM and MaRS Innovation to generate a better understanding of the chemical properties required to make small peptide-like molecules, which Encycle calls nacellins, orally bioavailable. This funding, generated through MaRS Innovation’s strategic partnerships programs with Pfizer Inc. and GSK, and CQDM’s global membership program with Pfizer Inc. and Merck, brings Encycle’s total funding to approximately $4 million, including an earlier investment in 2011 from Ontario Centres of Excellence.PHILADELPHIA (June 16, 2015) — FiercePharma has predicted that the pharmaceutical industry stands to lose $44 billion in drugs going off patent in 2015. The industry is searching for new therapeutics to replenish their pipelines while tackling existing and new drug receptor targets within the cell, improve patient care and lower administrative costs. In this context, drugs that can be orally swallowed, known as orally-bioavailable drugs, are in great demand.

“Encycle’s proprietary cyclized peptides are very different from other types of therapeutics and should enable us to target many of the proteins that are currently regarded as undruggable,” says Dr. Jeffrey Coull, Encycle’s president and CEO. “Our research suggests that, due to their unique properties, it’s easier for our peptides to cross cell membranes than it is for other types, allowing them to be taken orally and access proteins on the inside of a cell. Working on this project together with Pfizer and Merck through CQDM, as well as Pfizer and GSK through MaRS Innovation, we now wish to develop a more precise understanding of the relationship between their structure and composition, and the ability to be delivered orally.”

Today’s announcement builds on Encycle’s previous successes growing its lead molecules and platforms within the Ontario-Quebec Life Sciences corridor. A 2012 initial project, led by Dr. Yudin from University of Toronto in collaboration with Dr. Éric Marsault from Université de Sherbrooke in Quebec, and funded by CQDM in collaboration with MaRS Innovation, launched the initial development of Encycle’s platform technology and has generated a library of 1,400 macrocycles.

In November 2014, the company announced that it is developing its lead orally-bioavailable macrocycle drug to target integrin α4β7, which is involved in the inflammatory process in a number of diseases, most notably for inflammatory bowel disease. That project is funded by a partnership with the Institute for Research in Immunology and Cancer–Commercialization of Research (IRICoR), Université de Montréal and MaRS Innovation.

“The future of therapeutics belongs to molecules that are orally bioavailable,” said Dr. Rafi Hofstein, MaRS Innovation’s president and CEO and chair of Encycle’s Board of Directors. “A better understanding of the oral-bioavailability properties and capabilities will give Encycle’s macrocycles a considerable advantage over those of their competitors, many of which cannot be orally consumed. It also represents a prime example of how MaRS Innovation commercializes academic assets. I commend Encycle for their success in engaging the pharmaceutical community in developing and validating this unique drug discovery platform.”

“CQDM’s collaborative approach allowed us to support Encycle’s initial development of their unique technology when it was at a risky early stage, yet very promising,” said Dr. Diane Gosselin, president and CEO of CQDM. “Thus far, the results show great potential impact on biopharmaceutical R&D. Through our Quantum Leap Initiative and with support from Merck and Pfizer, we are proud to invest in Encycle Therapeutics as it brings its platform to the next level, generating significant commercial opportunities and helping the life sciences industry to find solutions to the unmet needs in drug R&D.”

“As a research-focused company committed to early stage private-public partnering, we believe that such interactions are a great way to align the innovation being generated by start-ups such as Encycle, to the critical issues facing the industry,” said Mr. Chirfi Guindo, president and managing director of Merck Canada Inc. “The industry mentors aim to provide a good balance between being practical and innovative, to ensure that the novel technologies being developed will indeed be used.”

“Partnerships between Quebec and Ontario promote the development of an advanced scientific expertise in the life sciences sector, thus helping to showcase our two provinces internationally,” said Quebec Minister of Health and Social Services, Dr. Gaétan Barrette. “The project announced today is another great example of academic collaboration. It led to the maturation of a promising technology, which is likely to attract foreign investments within the pharmaceutical industry.”

“Ontario is proud to support this innovative partnership between MaRS Innovation, Consortium Québécois sur la Découverte du Médicament (CQDM) and their pharmaceutical partners to help fund Encycle Therapeutics important research,” said Minister Moridi. “Collaboration like this holds the promise of developing new treatments for diseases that afflict so many and helps secure Ontario’s position as a centre of innovation excellence in life sciences.”

About Encycle Therapeutics
Encycle Therapeutics is a Toronto-based biotech company exploiting a unique platform technology that enables the rapid synthesis of drug-like macrocycles or membrane-permeable nacellins. Nacellins have enormous potential to target intracellular protein-protein interactions, which are largely intractable to small molecule and biologic modulation, and can represent cheaper, oral equivalents to existing biologics (e.g., monoclonal antibodies). Encycle has collaborated with several pharmaceutical companies to complete a screening library of nacellins, many of which are cell-permeable and possess other drug-like properties. The company is also pursuing independent development of nacellins against integrin alpha-4-beta-7 (IBD) and SMURF2 (fibrosis); its lead program seeks to develop orally bioavailable inhibitors of integrin alpha-4-beta-7, which are safer and less immunogenic than marketed and investigational biologics targeting the same protein.