Reaching nearly $17.5 million, this initiative launched as part of the first FACS program call for proposals is supported by the Ministry of Economy and Innovation (MEI) with a $6.45 million grant and is co-funded by private partners, including Quebec-based DalCor Pharmaceuticals, world-class biopharmas AstraZeneca, Bayer Inc. et Pharmascience as well as the Montreal Heart Institute Foundation.

Headed by Jean-Claude Tardif, Director of the Research Centre at the Montreal Heart Institute, this initiative builds on a network of nearly 100 multidisciplinary experts from industry and academia, as well as a multi-centre network of Quebec hospitals. Its goal is to create a world-class hub for clinical research and precision medicine in the cardiovascular field, and to subsequently broaden its scope to other disciplines such as oncology and neurology.

The project has delivered several innovative technologies since its launch in 2018. Among them is a federated data platform integrating results from more than 90 clinical trials, which includes genomic and clinical data from 675,000 patients. It also produced artificial intelligence-based (AI) analytical and statistical tools designed to support the development of clinical trials in precision medicine by making it possible to confirm the potential of therapeutic targets, predict their outcome, and target the groups of individuals most likely to benefit from a treatment, including:

These cutting-edge tools, now available to the scientific community at large, are already drawing interest from academic groups and the private sector that are now using similar tools to revisit data from large population-based clinical studies to optimize the time and resources invested in drug discovery programs.

Attracted by the expertise and innovations developed by the network, world-class pharmaceutical groups are now choosing to conduct their clinical studies in Quebec. More than $20.5 million in additional public and private funding has been invested since the project was initiated and four new clinical trials in precision medicine have been launched. The COLCOT (COLchicine Cardiovascular Outcomes Trial) study, coordinated by the Montreal Health Innovations Coordinating Center (MHICC) exemplifies this success by demonstrating the benefits of colchicine in patients with myocardial infarction. In August 2021, colchicine was approved by Health Canada for the treatment of patients with existing coronary heart disease. The drug has since been included in the guidelines of the European Society of Cardiology for the prevention of cardiovascular disease. This achievement demonstrates the successful repurposing of a readily available and inexpensive generic drug previously prescribed for the treatment of gout and pericarditis.

According to Dr. Jean-Claude Tardif, “This initiative allowed our team of academic and commercial partners to test personalized treatments, thereby adding a repurposed drug to the treatment options for cardiovascular disease. By finding new therapeutic uses for well-known drugs, we can improve the health of Canadians in a timely and cost-effective manner. The cardiovascular indication for colchicine that has been approved by Health Canada will foster changes in medical care, help patients with coronary heart disease and save costs for the health care system. The COLCOT academic clinical study could not have been accomplished without the financial support of the Government of Quebec’s FPQIS and FACS programs. We are very proud of this remarkable achievement resulting from the efforts of Quebec researchers, institutions and funders.”

Pharmacogenomic studies, led by Professor Marie-Pierre Dubé, Director of the Pharmacogenomics Center of Université de Montréal, are underway as part of the FACS initiative. They have already uncovered genetic markers that influence the efficacy and safety of drugs. Study results have also identified new therapeutic targets for cardiovascular diseases.

As an added bonus for Quebec, the network attracts world-class experts in science and health. The Quebec ecosystem promotes knowledge transfer and talent mobility, which attracts the next generation of health professionals and “hybrid” profiles. The FACS initiative will have trained talented individuals who can readily harness the significant innovation potential of artificial intelligence and the challenges of health research. As a result, Quebec benefits from the tremendous added value of experts who can apply their dual expertise to drug discovery and development. 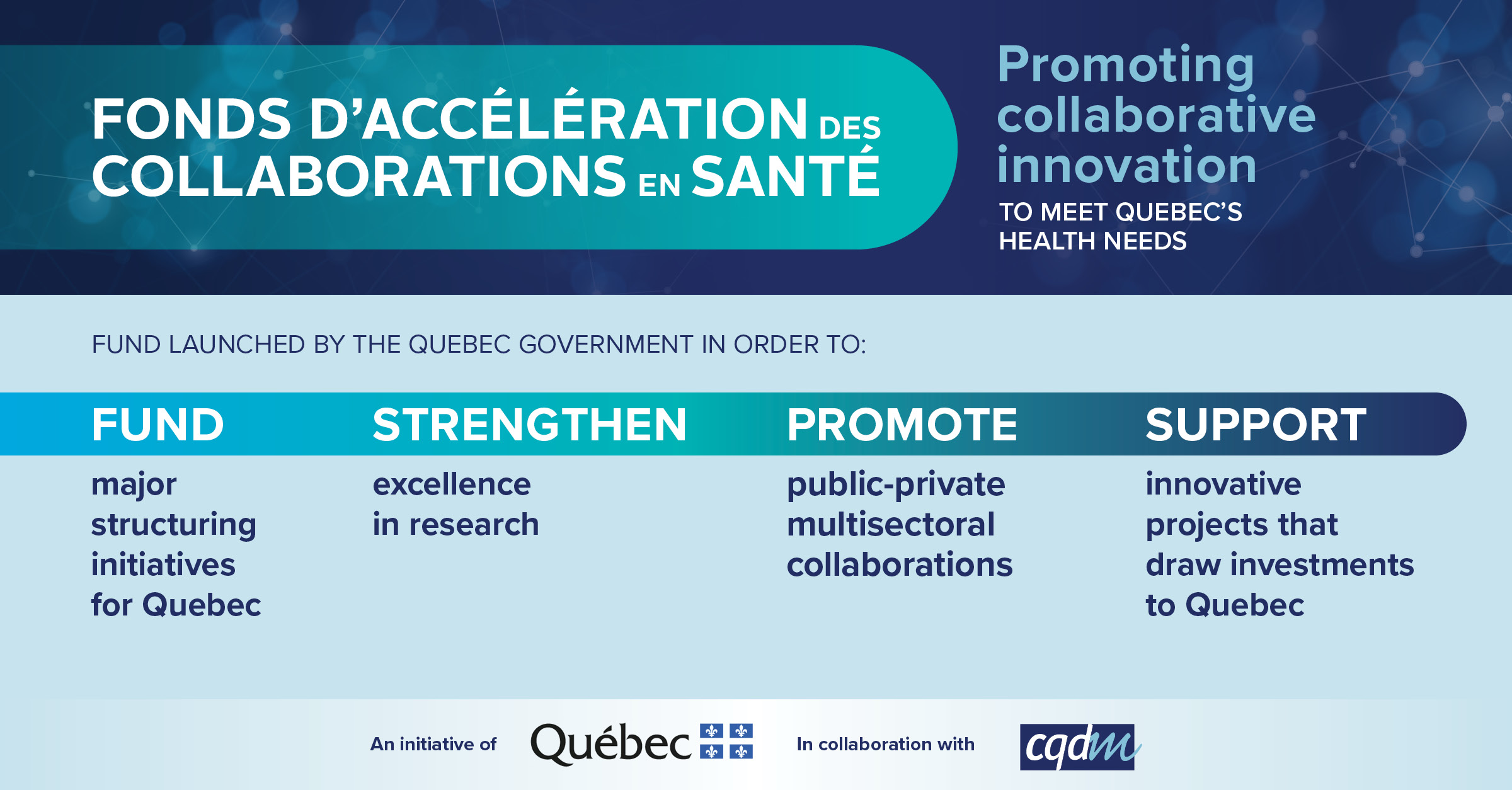 FACS OBJECTIVES - DETAILS
The Fonds d’accélération des collaborations en santé (FACS) and its 75 million $ funding envelope were created as part of the 2017-2027 Quebec Life Sciences Strategy. The fund is designed to support ambitious and structuring initiatives that rely on public-private partnerships where various stakeholders in the ecosystem join forces by leveraging their respective strengths. The impacts for the province of Quebec include:

As part of a 1st call for proposals launched in 2017, the Quebec Government invited industry players to submit ambitious projects that promote public-private partnerships and reinforce multi-institutional collaboration. Ultimately, 40 million $ were awarded to achieve 6 large-scale initiatives which were launched in 2018 and will end in 2022. A second call for proposals with a 35 million $ FACS funding envelope was launched in 2020 and the selected initiatives will be announced shortly.

FACS – The power of collaborative research 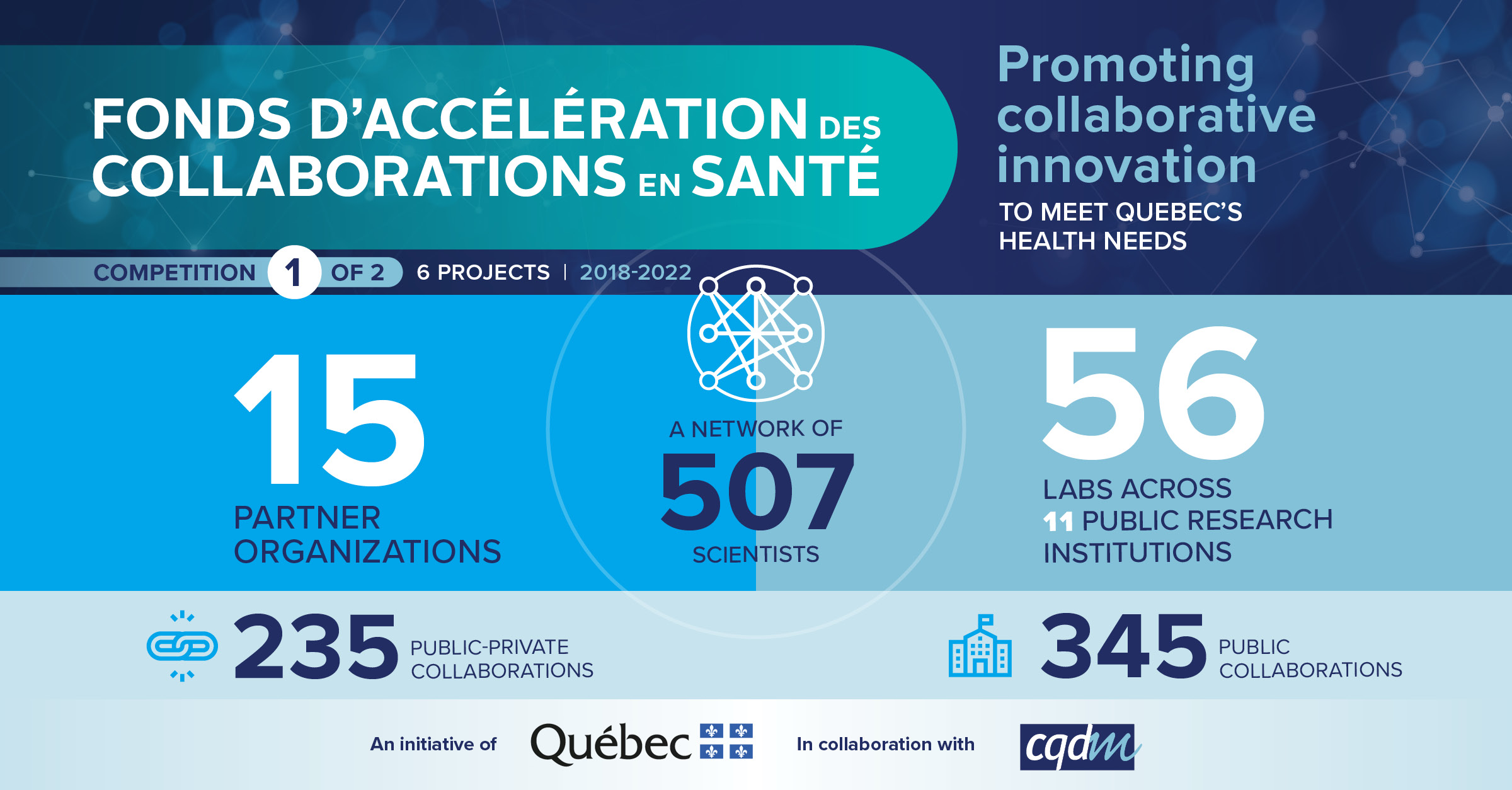 COLLABORATIVE RESEARCH - DETAILS
Initiatives funded under the FACS program stand out by the scope of the resulting collaborative network. They build on the leading-edge expertise of more than 500 public and private stakeholders in the life sciences sector. The initiatives funded as part of the first FACS call for proposals have fostered the creation or strengthening of over 230 collaborations between academia and innovative companies.  Such collaborations create valuable synergies that draw on the expertise of industries and fields, which is key to developing an effective innovation ecosystem. These partnerships empower companies to innovate by sharing the knowledge, costs, risks and rewards of R&D.  As a result, FACS projects increase the competitiveness of Quebec’s life sciences sector, particularly in certain niches of excellence in Quebec such as artificial intelligence, oncology, cardiology, infectious diseases and neurosciences. 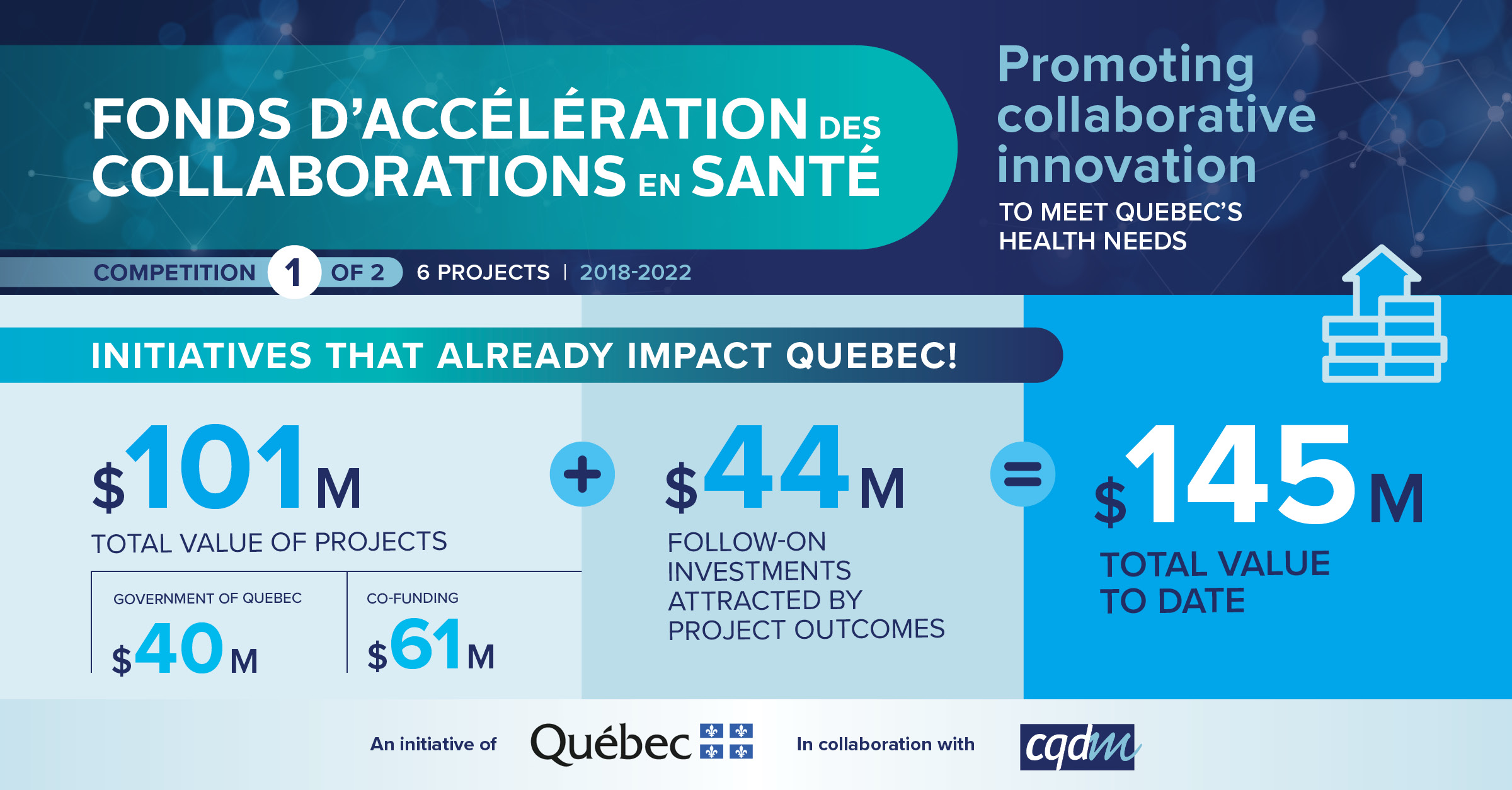 ECONOMIC BENEFITS - DETAILS
Initially, the 6 FACS initiatives launched in 2018 benefited from private matching funding from corporate partners. They have since produced successful outcomes that have attracted substantial additional investments. As a result, project participants have successfully raised $44 million in new private and public investments to date.

For the Government of Quebec who chose to back these large-scale initiatives, this represents an investment that has already generated a financial leverage of 3.6x. Since the projects are still underway, the magnitude of their economic impact for the province and the project partners is expected to grow considerably.

In the current context, the resulting financial leverage drives economic recovery by attracting private capital to support the development of marketable innovations. In addition, the funds support the discovery and development of new technologies that will maintain Quebec’s edge in life sciences, create and maintain highly specialized jobs and improve patient care and health. 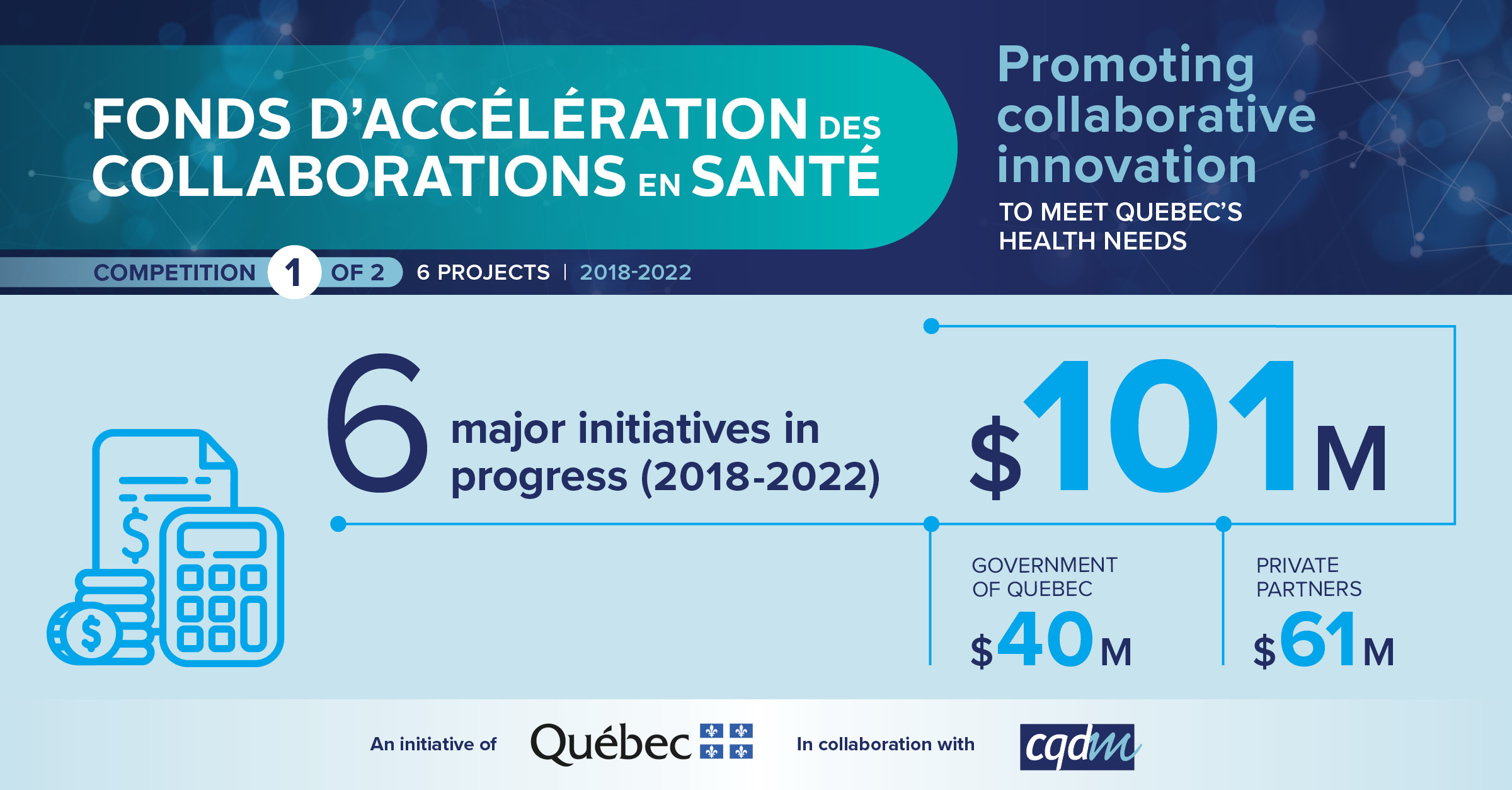 6 MAJOR INITIATIVES - DETAILS
As part of the first FACS call for proposals, the Government of Quebec awarded 40 million $ in funding to 6 large-scale initiatives involving several public and private stakeholders in the life sciences ecosystem.

This public funding has attracted 61 million $ in private matching contributions, which underscores the attractiveness of the initiatives for companies in Quebec and abroad. The projects were initiated in 2018 and will all be completed in 2022. 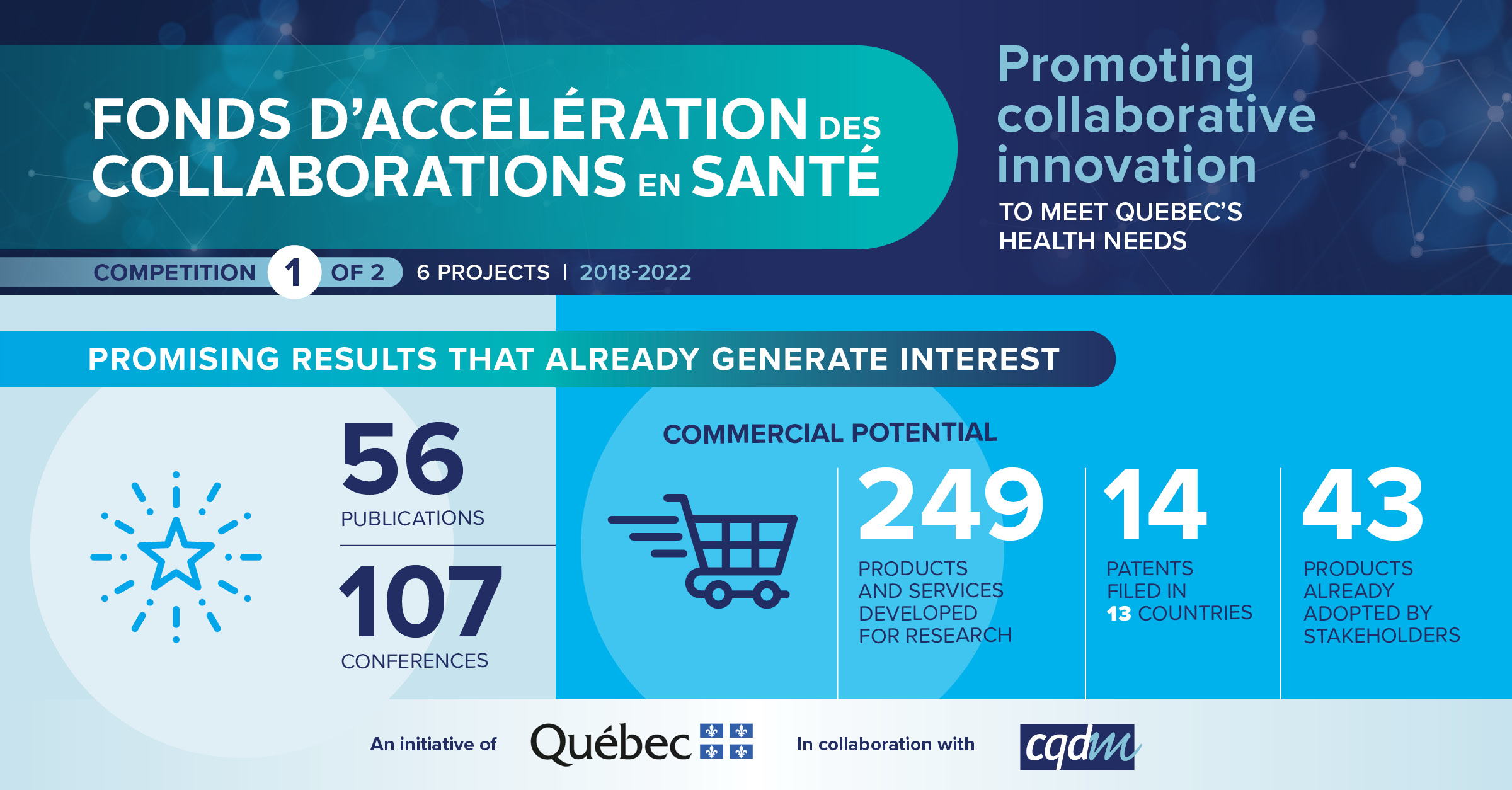 PROMISING RESULTS TO DATE - DETAILS
In the life sciences sector, innovations undergo a lengthy discovery and development process where outcomes often take years to emerge. Although the 6 FACS initiatives launched in 2018 are still in progress, they have already delivered a number of promising breakthroughs. For example, to date, they have led to the development of approximately 250 products and tools benefiting public and private sector research, some of which have already been adopted by stakeholders. These products and tools, combined with others that are still under development, will provide the researchers with invaluable assets to accelerate scientific discoveries in Quebec. These achievements offer a glimpse of the wealth of scientific and economic benefits to come.
Nous utilisons des témoins (cookies) et d'autres technologies de suivi pour améliorer votre expérience de navigation sur notre site Web. En naviguant sur notre site Web, vous consentez à ce que nous utilisions des témoins (cookies) et d'autres technologies de suivi. Accepter
Privacy & Cookies Policy

This website uses cookies to improve your experience while you navigate through the website. Out of these, the cookies that are categorized as necessary are stored on your browser as they are essential for the working of basic functionalities of the website. We also use third-party cookies that help us analyze and understand how you use this website. These cookies will be stored in your browser only with your consent. You also have the option to opt-out of these cookies. But opting out of some of these cookies may affect your browsing experience.
Necessary Toujours activé
Necessary cookies are absolutely essential for the website to function properly. This category only includes cookies that ensures basic functionalities and security features of the website. These cookies do not store any personal information.
Non-necessary
Any cookies that may not be particularly necessary for the website to function and is used specifically to collect user personal data via analytics, ads, other embedded contents are termed as non-necessary cookies. It is mandatory to procure user consent prior to running these cookies on your website.
Enregistrer & accepter